Many are comfortable paddling class III whitewater, but a river’s number classification alone doesn’t differentiate between steep, narrow creeks and high volume rivers. Understanding the characteristics, challenges and hazards of a creek can allow us to effectively make decisions on what kind of whitewater we are ready to tackle when discovering new rivers in new places. 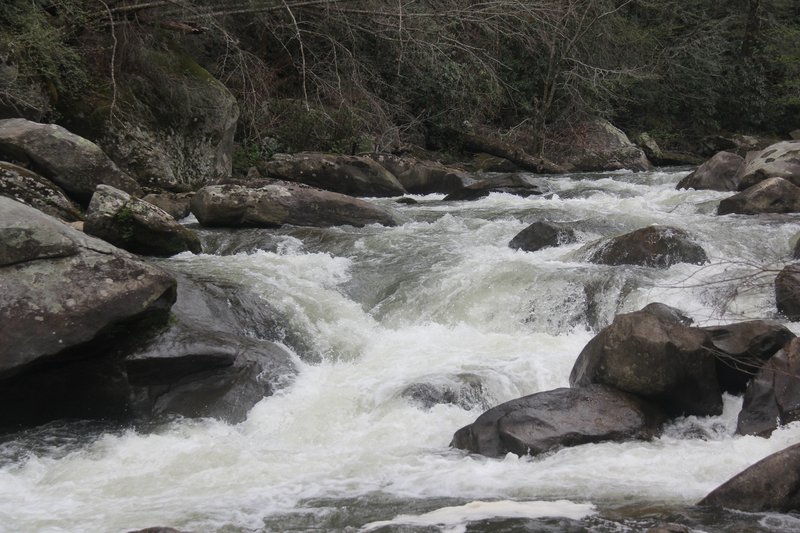 Generally narrower and with a lower volume of water, creeks are steeper rivers with more rocks to maneuver around or get pinned on. A low-volume creek doesn’t have the force to push obstacles out of the way, so creeks tend to have more rock obstacles and potentially wood collecting along the shore or mid river.

These are some creek specific hazards you are likely to encounter: 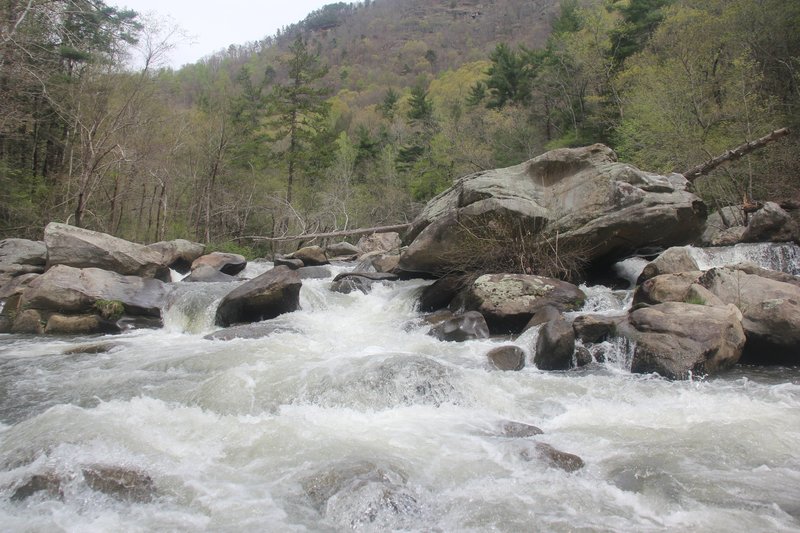 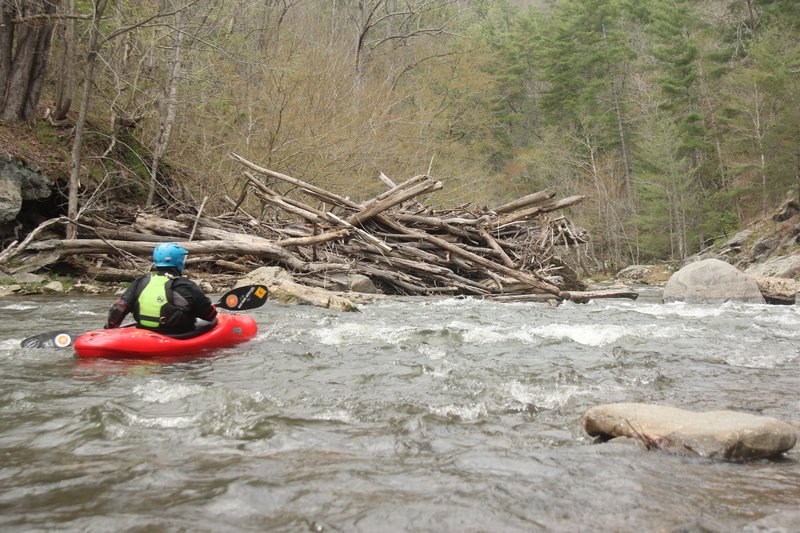 In some cases, you want to “boof” over or off the side of a rock (a well timed paddle stroke and a hip thrust to launch your boat forward) to avoid a nasty feature such as a hole or another rock. Practice in low consequence situations to get the feel of it.

Take a hand off your paddle once in a while to push yourself away from rocks or unstick yourself if you’ve come to a stop in shallow rocks. Also, if you hit a rock sideways, lean into it (hug the rock!) to avoid getting pinned.

Even though there is less of it, use the limited amount of water to your advantage – reading the way the current is redirected off of rocks, and taking limited but efficient strokes.

Slow your descent of the river to see what’s coming up. Breaking the river down into rapids, and rapids down into sections makes larger challenging runs more manageable.

Learn to identify features you see downstream from your boat rather than having to get out on shore scout each time you approach something new.

Move as a group downstream

Communicate important information on lines and hazards below.

Go through signals as a group before putting on. You don’t want “boof center, nose L” to be misinterpreted!

Ensure you always have your rescue gear, first aid kit and break down paddle on you/in your boat, as well as a good pair of footwear! Be sure to figure out who else in the group is carrying what – it’s never good to realize the only pin kit is in the boat that’s pinned! 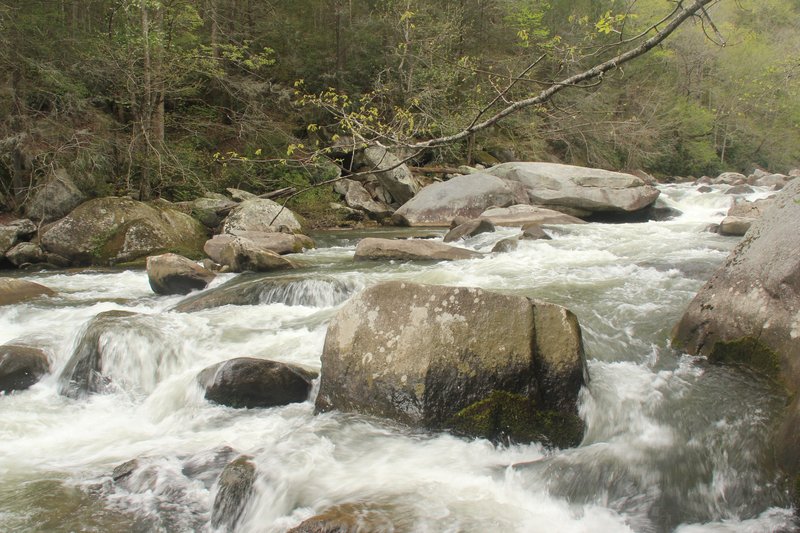 While each of the skills mentioned above will unlock a new level of success on a creek, one of the most important aspects of moving safely and comfortably downstream is communication and group management.

Eddies on a creek are often small, fitting only one or two boats at a time. Sometimes it is hard to see even one eddy downstream, and problems can compound quickly. Especially when some paddlers are new to the run, it is crucial that information from the lead boat be passed back to each person in turn, without turning into “broken telephone”.

If there is more than one person who knows the run, place these paddlers evenly throughout the group so they can reset the line and answer questions once in a while. Be prepared to make an instant switch to rescue mode; you may need to make a split second decision to change your line and avoid another paddler, signal the rest of the group while still paddling, or quickly find and catch an eddy.

Responsibilities based on your position in the group

As the lead (or reset) boat:
At the top of a rapid or move, wait in the staging eddy until at least one other member of your group has joined you. If possible, pick an eddy that can fit your whole group so that the information is only given once and remains accurate. Make your instructions clear, specific and concise. Mention major hazards and consequences, the best route, and where to stop next.

Remember that the next paddler must relay your message, so be concise. For instance: “we’re going left of that big triangle-shaped rock and down a slide. Stay left as you go down but keep your nose pointed right. There’s a great boof at the bottom. Watch for the tree far right. Make sure you catch the eddy below on river left.”

Model the line you want taken by the next boater, and position yourself downstream in a spot that allows you to assist them should the need arise, as well as communicate necessary information back upstream with paddle or hand signals.

As a boater in the middle of the group:
As you enter into the eddy, be prepared to listen to instructions and watch the boater in front of you make their move downstream. As the eddy clears and there is now room for two again, wait until the boater after you arrives and you can pass along important information to them before you run the rapid or complete the move. Depending where other members of the group are positioned downstream and how long the rapid is, either take over the safety position, or continue to follow your ‘leader’ into the next eddy to start the process over again. In this way, a line or move can be communicated between the first and last paddler quite seamlessly, and everyone supports everyone else in the team.

As the sweep boat:
The last boat has the added pressure of the information potentially changing from the original as it passes through 4 or 5 people. This is especially true with larger groups, and groups that only have one person who knows the line. For this reason, it is often prudent to limit total group numbers when creeking, depending on the run.

Additionally, the sweep has no one paddling behind them to see something happen or to access them from upstream for a rescue (for instance in a pin). Often this person will be one of the more experienced paddlers in the group, confident at reading and running difficult rapids, as well as a competent rescuer.

For many people, not having the option of scouting sections of whitewater from shore can be incredibly intimidating. Boat scouting blind drops, boulder gardens and sharp bends in the river adds another element of challenge to the run. For this reason, keep groups small, be prepared to move slowly, communicate well, and support each other for safety and rescue.

Communication between group members extends to more than just relaying the line. From below, the paddler in front can position themself so that there is a straight line between them and the paddler in the eddy above and pass along more specific instructions based on their experience running it. Hand signals such as “boof”, “nose right” or “nose left”, “straight from you to me”, “to the right” or “to the left” are incredibly helpful and reassuring to the paddler above, but can also be confusing if not executed clearly.

As a group, determine the signals that will be used on the river before getting in your boats, and make sure everyone is on the same page. Remember that it is hard to hear over the roar of whitewater and practice these visual cues beforehand.

Additionally, be sure that each member of the group carries a whistle.

More group management issues include who carries what and where they position themselves. Not everyone needs to carry a first aid kit, break down paddle, extra food, communication device, pin kit and repair kit, but each of these should come along on every creeking trip, and be spread out amongst the paddlers so that if one boat gets washed downstream not everything is lost. Generally, the sweep should carry the first aid kit. That way if something happens to a person near the back of the group it will be easy to move things downstream, rather than having to wait for something to come back up.

Choosing a boat for creeking

Creek boats, specifically designed for steep, low volume runs, have higher overall volume, as well as added volume in the stern. This helps to keep the paddler on top of the water and the edges out of the water. It also avoids the stern being caught and sunk by holes after ledges or waterfalls, and allows the boat to move over features such as small holes or waves. They are mostly displacement hull boats, which mean that the edges are more rounded and less likely to get caught by rocks or funky current.

A larger creek boat also boofs more easily than a smaller river runner or playboat. The more spacious hull allows the paddler to carry rescue gear and any extended day trip or overnight safety gear. Because there are so many rocks in this type of river, it’s a good idea to carry a repair kit to deal with any cracks in the field. Once back at home, most kayaks can be welded back together, ready to see another day on the river.

Some modern examples of creek boats are the Dagger Nomad, Wavesport Recon, Liquidlogic Jefe and Flying Squirrel. That being said, many people choose boats that combine volume with a faster hull, a feature that normally describes a river runner. Boats such as the Dagger Mamba and Pyranha Shiva or Burn are examples of these alternative creek boats.

In a canoe, many paddlers opt for a newer-style plastic boat. These boats stand up well to being scraped over rocks, and can be easily welded back together similar to a plastic kayak. They are generally shorter and more maneuverable, allowing the canoeist time and space to make the move and avoid getting pinned. Having a shorter canoe also means you have less boat to boof, and allows the entire canoe to clear a drop and land flat, rather than falling off, burying the nose and filling the boat with water.

A downside to plastic canoes is that they may be heavier, and because they are shorter, and often paddle a little differently (spin, spin, spin!). Some popular models are the Blackfly Option and Octane, the Esquif L’Edge, Prelude and Taureau.

ABS boats made of layered plastic and foam are also good options, though over time they won’t stand up to abrasion on rocks as well. A Kevlar felt skid plate on the bow and stern of your boat can help protect these high wear areas. Make any necessary repairs right away, as the more damaged your boat becomes, the harder it is to get it back to its original condition. A little prevention can go a long way in keeping your canoe creek-ready for many years. Shorter boats are generally more versatile for tight maneuvers and steep drops in small creeks. The Novacraft Ocoee and Mad River Outrage are two examples of shorter ABS canoes.

Whatever boat you choose to paddle, remember that a creek is very different than a larger volume river. In order to find creeking success, identify and avoid hazards, bring your rescue gear, scout effectively from your boat and from shore, and communicate effectively within your group. Have fun using the rocks and water and make it to the takeout of your next whitewater creeking adventure safe and sound.