Foot entrapment is a dangerous and potentially life threatening situation that no rescuer wants to encounter. The focus should be on prevention, and effective coaching of people who are new to moving water.

But when a foot entrapment does occur, the rescue must be fast and well-executed. To prepare for this possibility, a rescue team should know and practice the following techniques, and be ready to immediately employ the most effective one for any given situation. 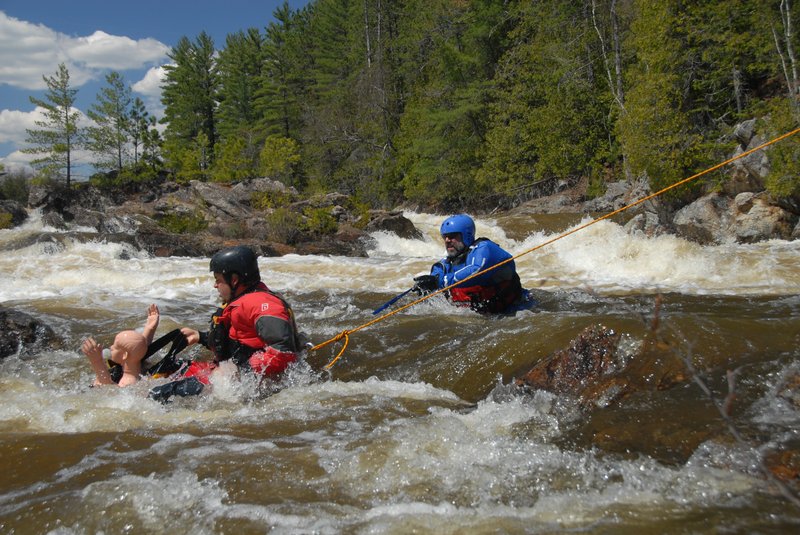 Anyone entering moving water for the first time, whether in a boat or as a swimmer, should be introduced to the risks of foot entrapment, and taught safe swimming techniques. It is especially important to make time for multiple practice swim-throughs with safe swimming technique. Like with any skill, repeated practice develops muscle memory, and affects automatic responses in higher stress situations.

Instruct people to keep their feet at the surface, and to not attempt to stand up while floating downstream. A swimmer should only attempt to stand after coming to a complete stop. If swimming over a ledge, a steep drop, or a pourover, the swimmer should ball up by pulling their knees towards their chest while on their back. This will prevent their feet from dangling down and possibly getting entrapped in the river bottom as they go over the drop.

As with any rescue, it is important to choose the most effective technique within the team’s acceptable level of risk. While speed is an important part of an effective foot entrapment rescue, special care should be taken not to destabilize someone who is able to breathe. 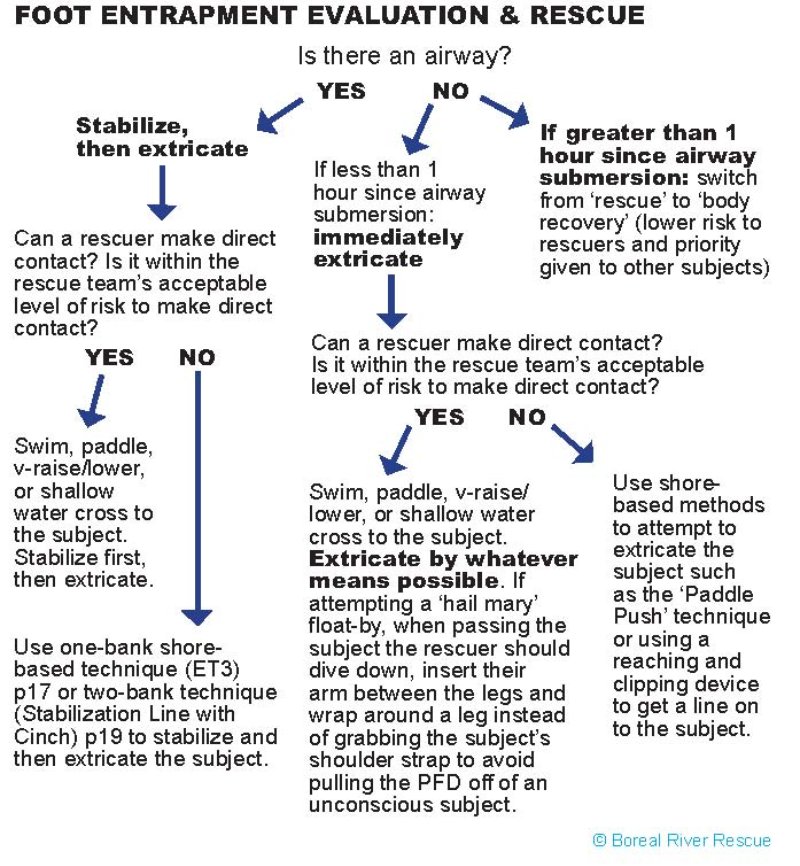 There are a number of ways that a rescuer can physically get hands on a subject who is foot entrapped. Often the most effective rescues are simple and do not require much equipment. Consider the effectiveness of shallow water crossing, swimming, or paddling to the subject before adding unnecessary ropes.

Because this type of rescue is time sensitive, if numbers allow, some rescuers could immediately initiate more technical rescues while others attempt the less technical direct contact options. Getting a line across the river right away will get the rescue team ready for a V raise or lower, or the 2 bank rope rescues explained below.

Effective approaches differ between a conscious subject with their head above the water, and an unconscious subject without an airway. A subject who is completely submerged may be difficult to see, especially if approaching as a swimmer. If someone on shore knows the location of the subject, they can assist in landmarking. Standing on shore level with the subject and giving left, right or go signals, they can direct a rescuer approaching from upstream.

For the 1 bank rescue, rescuers need access to an island or riverbank that is less than 10m/30’from the subject. This technique is used for a subject who is in a spot that is either too dangerous or too difficult for rescuers to access with direct contact. It only works if the subject has an airway (head above water).

STEP 1: Starting from the middle of a throw rope, both rescuers make butterfly coils into their throwing hand, working out towards the ends of the rope. One rescuer needs to throw with their left hand, the other with their right hand.

STEP 2: In unison, the rescuers throw their coils out past the subject with their throwing hand, each holding onto an end of the rope in their non-throwing hand.

Throwing Tips To Create A Big Loop Of Rope

STEP 3: Once the subject is ‘inside’ the loop of rope, cross the lines to create a ‘cinch’. Which way the lines cross is important: once crossed, the upstream line should be underneath the downstream line.

The 2 bank rescue technique is used for a subject who is in a spot that is either too dangerous or too difficult for rescuers to access with direct contact. It only works if the subject has an airway (head above water). Rescuers need access to both banks (or islands) on either side of the subject. Generally 20m/60’ is the maximum width of channel where this would be effective.

STEP 1: Get a rope and rescuers across the channel.

STEP 2: Place line across subject’s chest. Try to get the subject to put their arms over the line.

STEP 3: Move the ends of the stabilization line upstream so that the subject is ‘inside’ an angle of 90° or less. This way the rescuers will have positive pulling strength on the subject. Once the subject is stabilized with their head out of the water, hold the line there but don’t pull further, otherwise it can pass over the subject’s head.

STEP 4: A second line (the ‘cinch’ line) is clipped onto the stabilization line at the ‘weak’ side upstream of the patient and extends across to the ‘strong’ side, where it is held by a rescuer.

STEP 5: Pull in slack on the cinch line and make sure it remains over top of the stabilization line.

The paddle push rescue technique is used for a subject without an airway (head below water), who is in a spot that is either too dangerous or too difficult for rescuers to access with direct contact.

Other shore techniques will not work since the subject will be at or below the surface of the water; the only way to get a stabilization line under the subject is to sink the line. This must be accomplished by lowering the anchor points of the rope below the surface of the water, causing the middle of the rope to sink when under tension. Past techniques of filling a throw bag with rocks have not been successful; when the line is pulled taut, it raises to the anchor points – the rescuers on shore.

Rescuers need access to 2 banks (or islands) on either side of the subject. Generally, 20m/60′ is the maximum width of channel where this could be effective.

STEP 1: Get a rope across the channel, and at least two rescuers and one paddle on each side.

STEP 2: If there is a chance that the subject is still conscious, it may be possible to hold the rope above them, and swing it to hit their back. This could allow the subject to grab hold of the rope and put it under their chest.

STEP 3: Have the two rescuers with the paddles use an accessory cord already tied in a loop, and use a girth hitch to tie this to the paddle. Clip in a carabiner and use this to attach the two paddles to the line.

STEP 4: At the same time, have the other two rescuers move upstream of the subject with the ends of the rope. The rescuers with the paddles should then position themselves in the water, in line with the subject’s legs, and as close to the subject as is safe and possible. There should be enough slack in the line so the apex is just downstream of the outstretched arms of the subject.

All of these foot entrapment rescue techniques are found in the Whitewater Rescue: Waterproof Field Guide. Order your Field Guide today.

« Protecting the Magpie River
How to Carry a Throw Bag »