Whether you are travelling on ice for recreation, work or transit, ice assessment techniques are essential to making informed decisions. Consider these 6 aspects of ice assessment before heading out onto the ice. 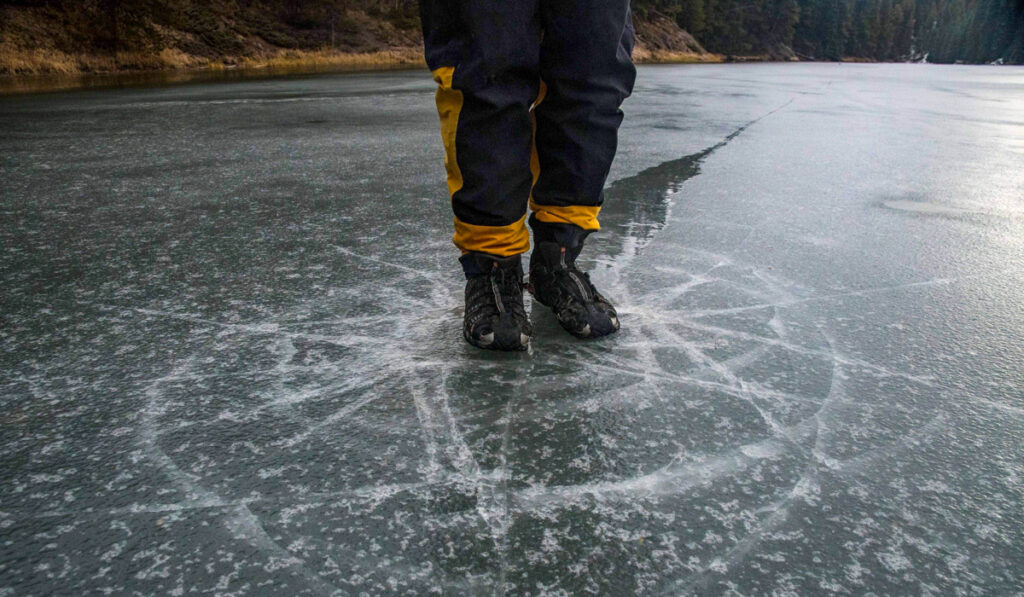 While a lot of attention is typically given to the thickness of ice, assessing quality of ice is actually a better starting place given the vast variation between different types of ice.

Clear ice, also known as black or blue ice, forms from the top down, and is generally the strongest type of ice. On a lake or river with little or no wind and current, this kind of ice can form as smooth as glass. Some ice is so transparent that the bottom of the ice sheet can’t be seen. Bubbles or cracks in the ice can give visual clues of the ice thickness.

White ice or snow ice forms on top of an ice sheet. It can result from a melt-freeze cycle of the ice surface, or of snow on the ice. It can also form when water floods onto the surface of the ice and then freezes. There are many ways this could happen, including water being forced up through cracks in the ice, or a water level rise in a river or stream. White ice is generally considered to be 50% as strong as clear ice for a given thickness. Human constructed white ice is formed through controlled flooding of an ice surface in thin layers, and can be of comparable strength to clear ice.

Jam ice is formed when chunks of ice get piled up, either by the current in a stream or river, or by wind or wave action on a large lake. These chunks of ice may not be bonded very well to each other, and it can be difficult to accurately assess their strength.

Thickness guidelines apply to clear and white ice floating on water. A water level drop can result in unsupported ice with air beneath. Significant water level changes occur most often on rivers and dam controlled lakes, but can occur on natural lakes as well. Look for ice that has collapsed, or is sloped down from the shore. It is very difficult to assess the strength of unsupported ice.

Melt conditions can also result in so much variation in quality that no thickness guidelines can be applied. Internal melt of an ice sheet is often described as “rotting” or “decomposition.” Just like a rotten log, rotten ice that looks intact may have very little structural integrity. For example, 12 inches of cold ice can support the weight of a car, while the same thickness of rotten ice might not support one person on foot, or even a light tap with a hand or stick.

On good quality clear or white ice, testing the thickness is a good starting point for determining how much weight can be supported.

Ice thickness guidelines are always given for clear ice. Official guidelines in Canada and the United States generally recommend 4” of clear ice for travel on foot, 5”-7” for a snowmobile, 8”-12” for a car, and 12”-15” for a truck up to 5000kg. 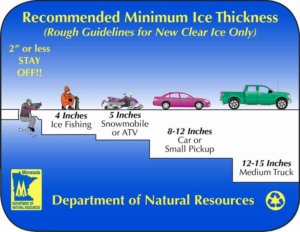 You may encounter a layer of white ice on top of clear ice. In this case you could calculate the effective thickness as follows:

As explained above, the strength of unsupported ice and thawed ice are both very difficult to assess for a given thickness.

Loads heavier than 5000kg should only travel on properly assessed and maintained ice roads. For more information, see the Ontario manual for Building and working safely on ice covers.

Any load on an ice cover causes the ice to gradually deflect downwards. A load that is stationary for more than 2 hours is considered a long-term load, and requires thicker ice.

A good approximation is to add 50% to the short-term recommended ice thickness. This is especially important to consider for a car or truck, which may not be moveable if it breaks down on the ice. If the ice is not thick enough for a long term load, be prepared to abandon the vehicle as the stationary time approaches 2 hours.

Deflection can be measured by drilling a hole in the ice near the load; if water comes to the surface of the hole, or wells up onto the ice surface, the ice is deflecting significantly under the load.

Ice thickness can be tested with any tool that can chip or cut through the ice, but your choice of tool will depend on the activity you are engaged in. In addition to a tool for making a hole, it is important to have a way to accurately measure the ice thickness. A measuring tape works well, as it can hook onto the bottom of the ice, but a pole or auger can also be marked and used as a measuring device.

Nordic skating poles are like ski poles but with a sharp steel tip, and can test thin ice, up to just over 2”. This is an effective tool for wild ice skaters, who need to test the ice often and quickly, and are most concerned about a 2” threshold (see acceptable level of risk below).

Ice testing poles and ice chisels (also called spuds) are similar, but tend to be longer and heavier (up to 8 feet long, often with a hardwood or steel shaft). Ice testing poles have a round pointed steel tip, and can typically break through 2”-4” of ice, while a good ice chisel can cut through 4 or more feet of ice with enough time.

Axes, ice axes, hatchets or even crowbars can be used to chip a hole in the ice.

Ice screws, typically used in ice climbing, can test ice thickness in addition to being used as anchors for rescue. They come in various lengths, from 10cm-22cm (4”-9”). A 15cm (6”) ice screw works well for testing ice for travel on foot, and a 20cm-22cm (8”-9”) screw for snowmobile travel, or for several people in a small area.

A battery drill with a wood auger bit is faster than an ice screw, and can test through thicker ice if the bit is long enough.

Ice augers, chain saws and ice saws are often used to cut holes for ice fishing, but can also be used to cut a test hole. There are manual, gas and electric augers to cut a range of hole sizes, typically from 5”-10” in diameter, while a chain saw or ice saw can cut a hole of any size. Since these tools are all meant to cut larger holes, it tends to be a longer process. However, cutting a larger hole or cutting out a chunk of ice allows for assessment of the ice profile. These tools are also ideal for cutting a test hole through very thick ice for heavy loads (eg. on an ice road).

Rivers with current and very large lakes freeze over later (if at all) and with more variation in thickness than smaller lakes. In light of this, they require a more advanced set of assessment and rescue techniques.

While smaller lakes tend to form more uniform ice sheets, there are several factors that can cause variation in thickness. Underwater springs or current from a river inlet or outlet can cause thinner ice than the surrounding area, or even keep an area ice-free throughout the winter.

Fish can stir up warmer water from the bottom of a deep lake, and air bubbles from decomposing matter can also carry warmer water to the surface.

Wind and sun exposure can keep a section ice-free for longer than shaded, less exposed areas, resulting in thinner ice once it forms. At the edge of a lake, the ice cover can sometimes pull away from the shoreline, leaving a narrow band of open water and often thinner ice along the shore.

Connect with locals when possible to get an idea of current ice conditions and known springs. Test ice thickness and quality often.

Some cracks are signs that an ice sheet is thickening and strengthening, while others are a warning sign that it’s time to get off the ice. Sorting cracks into low, medium and high concern categories is a good starting point for learning crack anatomy. 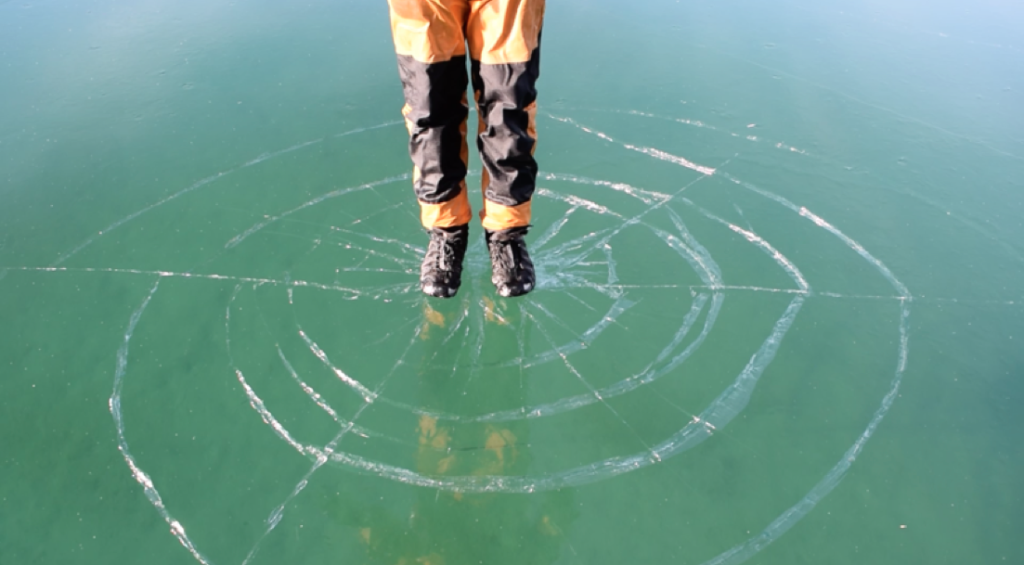 Caption: Radial and circumferential cracks. These were created by jumping to apply more force to the ice. The ice is still strong enough to hold the person standing.

6. Determine your acceptable level of risk

Deciding which ice to travel is all about assessing your level of acceptable risk. Experienced backcountry skiers don’t seek out terrain and conditions that have zero chance of getting caught in an avalanche, because much of the best skiing is found in avalanche terrain. Instead, skiers mitigate the risk with training and equipment to respond effectively to an avalanche. Similarly, for a “wild ice skater,” seeking out smooth, snow free ice often means getting out onto new ice as early as possible. This results in a higher rate of breakthrough/swimming. For many, this is an acceptable risk if there is a realistic plan for responding to the possibility of a swim.

A rescue team might accept an even higher level of breakthrough risk, but would arrive on scene dressed and prepared to go in the water and with training to mitigate that risk.

At the other end of the spectrum, an ice road driver or ice fisher is likely to have a low level of acceptable risk for breaking through. While equipment and training are important, the focus is on conservative ice assessment and prevention.